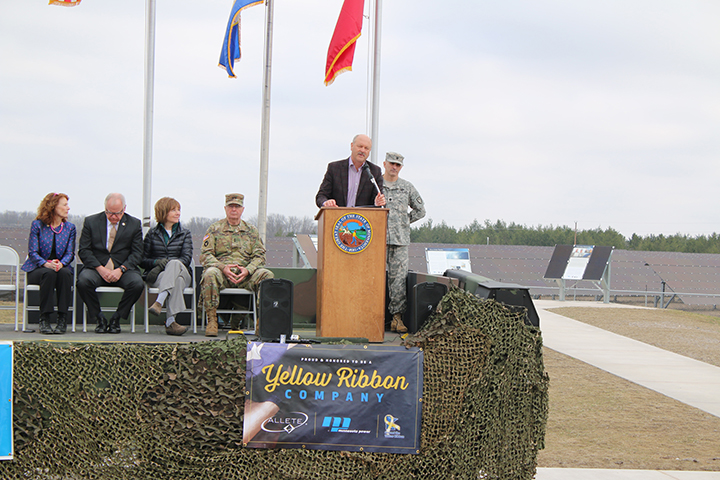 The company built the 10-megawatt solar array under a Memorandum of Agreement Minnesota Power and the National Guard signed in 2014 to increase renewable energy production and identify ways Camp Ripley could reduce its energy use and enhance energy security.
“Today’s event underscores the power of public-private partnerships to meet the nation’s call to transform its energy landscape, and how finding the best energy solutions requires all of us working together,” said Al Hodnik, chairman, president and CEO of ALLETE, Minnesota Power’s parent company. “This solar array is an important component of our Energy Forward strategy to provide energy from increasingly cleaner sources to the customers and communities we serve, and will help Minnesota Power meet state solar energy goals while also providing enhanced energy security to Camp Ripley.”

The energy generated by the universal solar facility is delivered to all Minnesota Power customers. The array also is designed to allow Camp Ripley to use the solar energy should a disruption in normal service happen, providing enhanced energy security for the military site.

“Minnesota Power has been an energy innovator for the past 110 years with a commitment to delivering safe, reliable, economical and cleaner energy to customers,” Hodnik said. “This project is the latest demonstration of the transformative energy initiatives undertaken by the company, and we hope to see more such partnerships emerge.”

Construction of the solar array began in May 2016, and it was fully operational on schedule in November 2016 despite damage to a quarter of the array suffered when a tornado blew debris into the panels in September 2016.

Also at today’s event, the Minnesota Power Foundation provided a $10,000 contribution to the Veterans Art Project which is sponsoring murals of each service branch inside Committal Hall at the Minnesota State Veterans Cemetery which is across the Mississippi River from Camp Ripley.

The 10-megawatt, $25 million project at the National Guard’s Fort Ripley base near Little Falls covers an area about the size of 62 football fields and generates enough electricity to power nearly 2,000 homes per year. More than 116,000 thin-film solar panels send direct-current electricity to eight inverters, where the power is converted to alternating current. The panels, made by First Solar of Ohio, are produced by coating glass with a thin layer of cadmium telluride that absorbs the sun’s energy and converts it to electricity.
The 193 rows of panels face due south to point directly into the sunlight most of the time, with the panels installed at a 35-degree angle that also helps them shed snow. They’re designed to withstand half-inch hail and 105 mph winds, and are expected to generate electricity for more than 30 years.

Minnesota Power provides electric service within a 26,000-square-mile area in northeastern Minnesota, supporting comfort, security and quality of life for 145,000 customers, 16 municipalities and some of the largest industrial customers in the United States. More information can be found at www.mnpower.com