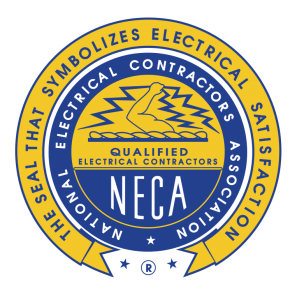 On Thursday night, May 2nd, 1957, at the Holland Hotel the Duluth Electrical Contractors Association held a meeting with a representative of the National Electrical Contractors Association. It was decided that the group favored the forming of the Twin Ports Arrowhead Chapter to cover the jurisdiction of Local #31 (Duluth), Local #276 (Superior), and Local #294 (Iron Range). The group elected Tom Monaham, Earl Mitchell, Bill Johnson, Oscar Hanson, and Melvin Oien to be members of their first Board of Directors. The Chapter received its official charter on June 5th of 1957.

Because of the geographical size of the Chapter, it was divided into four divisions: Duluth (1957), Superior (1958), Iron Range (1958), and Brainerd (1958). The Chapter hired John Franklin as their first Chapter Manager and he was followed two years later by William S Johnson.

The industry itself can be said to have been born in 1879 by Thomas Alva Edison introducing the successful carbon incandescent lamp. Many of the first electrical contractors rose from the ranks of employment with Edison Electric Illuminating Companies or by working for the telephone companies or for the forerunners of public utilities. As far as can be determined, the first official electrical contracting business opened shop in New York City in 1882. Soon, hundreds of other electrical contracting companies sprung up in major cities across the continent.

Trade associations began to flourish around this same time. Local associations of electrical contractors were established to meet needs that could not be met by individual contractors working alone. Working in cooperation allowed the contractors to share tools and skilled workers – both of which were in short supply in those early days – and to exchange ideas and information, just as association members do today.

Banding together also helped contractors gain a greater say in the development of local business ordinances. Despite their progress, local electrical contracting associations lacked the strength and unified voice necessary to deal with some big issues, including a lack of uniformity in manufacturing specifications for equipment, the absence of consistent installation procedures, and the inconsistency in the laws and regulations governing electrical construction.  In those early years, very few laws actually addressed the trade at all.

At the same time, many electrical contractors saw the need to establish state laws on licensing the trade. By 1900, Minnesota was the only state to have enacted such regulations, and local electrical contractors associations were beginning to look to it as a model that should be replicated. They perceived that requiring everyone in the business to meet basic standards of competency would benefit the industry’s reputation and protect the public. It would take some time for the fledgling electrical construction industry to address all these concerns, but movement in this direction began before the 20th century commenced.

In early 1901, the United Electrical Contractors of New York State group was preparing for its convention at the Pan-American Exposition in Buffalo.  They sent out a call for representatives of all the electrical contracting associations across the nation to join their convention to explore the possibility of establishing a national organization. The call was answered by 49 contractors from 18 cities in eight states – New York, Maryland, Missouri, Minnesota, Michigan, Massachusetts, Ohio and Pennsylvania.

Carrying out those objectives would continue to occupy the association for the next century – and well beyond!

*necanet.org, “About Us – Mission & History”

Shortly after the formation of the National Brotherhood of Electrical Workers first union in St. Louis, Missouri, a group of inside wireman and lineman working for contractors, the Zenith City Telephone Company and the Duluth General Electric Company formed an independent union which functioned for several years until an organizer came to Duluth via the “side door pullman.” On August 20th, 1899 the group was placed the group under the charter of the National Brotherhood of Electrical Workers and became known as IBEW Local #31.

On April 1st, 1976 the Local Union #31 was divided, with Local #31 remaining as Utility Workers and the Construction Inside Wireman becoming Local #242 under a new Charter.  Both are still in existence.  The newly flagged Local #242 represented inside construction, wireman, electrical maintenance workers, radio/TV, and manufacturing groups.

With Edison’s invention of the first commercially successful incandescent lamp in 1879, the general public became aware of the possibilities of electricity. The electric power and light industry was established with the construction of the Pearl Street Generating Station in New York in 1882. Where once only a few intrepid linemen handled electricity for a thrill, many now appeared on the scene, and wiremen, too, seeking a life’s work. As public demand for electricity increased, the number of electrical workers increased accordingly. The surge toward unionism was born out of their desperate needs and deplorable safety conditions.

The nucleus of the IBEW formed in 1890. An exposition was held in St. Louis that year featuring “a glorious display of electrical wonders.” Wiremen and linemen from all over the United States flocked to Missouri’s queen city to wire the buildings and erect the exhibits which were the “spectaculars” of their era. The men got together at the end of each long workday and talked about the toil and conditions for workers in the electrical industry. The story was the same everywhere. The work was hard; the hours long; the pay small. It was common for a lineman to risk his life on the high lines 12 hours a day in any kind of weather, seven days a week, for the meager sum of 15 to 20 cents an hour. Two dollars and 50 cents a day was considered an excellent wage for wiremen, and many men were forced to accept work for $8 a week.

No wonder electrical workers of the Gay ’90s sought some recourse for their troubles. A union was the logical answer; so this small group, meeting in St. Louis, sought help from the American Federation of Labor (AFL). An organizer named Charles Cassel was assigned to help them and chartered the group as the Electrical Wiremen and Linemen’s Union, No. 5221, of the AFL.

A St. Louis lineman, Henry Miller, was elected president of that union. I.O. Archives photos show him to be a tall, handsome man with broad, powerful shoulders; keen blue eyes; and reddish-brown hair. To him and the other workers at that St. Louis exposition, it was apparent their small union was only a starting point. Isolated locals could accomplish little as bargaining agencies. Only a national organization of electrical workers with jurisdiction covering the entire industry could win better treatment from the corporate empires engaged in telephone, telegraph, electric power, electrical contracting and electrical-equipment manufacturing.

A great deal was accomplished in that first year. Locals chartered by the AFL and other electrical unions were organized in Chicago, Milwaukee, Evansville, Louisville, Indianapolis, New Orleans, Toledo, Pittsburgh, Cincinnati, Duluth, Philadelphia, New York and other cities. A first convention was called in St. Louis on November 21, 1891. Ten delegates attended, representing 286 members. This is where the delegates elected Henry Miller as the first Grand President. It was a humble beginning. The name adopted for the organization was National Brotherhood of Electrical Workers. The delegates to that First Convention worked night and day for seven days drafting the first Constitution, general laws, ritual and emblem—the well-known fist grasping lightning bolts.

On December 7, 1981, a request for a charter to the AFL convention in Birmingham, Alabama was granted. This gave the NBEW sweeping jurisdiction over electrical workers in every branch of the trade and industry. Henry Miller and other officers of the union willingly donated their own time and money to create better working conditions and extend the organization to anyone seeking to make a living from electricity.

By the time the Second Convention met at Chicago in 1892, the brotherhood had grown to 43 chartered locals and nearly 2,000 members!

The Preamble to the first Constitution included the following goals which have been retained, except for slight changes in language by every Convention of the IBEW:

“The objects of the International Brotherhood of Electrical Workers are: to organize all workers in the entire electrical industry in the United States and Canada, including all those in public utilities and electrical manufacturing, into local unions; to promote reasonable methods of work; to cultivate feelings of friendship among those of our industry; to settle all disputes between employers and employees by arbitration (if possible); to assist each other in sickness or distress; to secure employment; to reduce the hours of daily labor; to secure adequate pay for our work; to seek a higher and higher standard of living; to seek security for the individual; and by legal and proper means to elevate the moral, intellectual and social conditions of our members, their families and dependents, in the interest of a higher standard of citizenship.”

-Excerpted from “Carrying the IBEW Dream into the 21st Century”